Lanark County youth will benefit from restorative justice with a new three-year outreach initiative, courtesy of the Lanark County Community Justice Program (LCCJP) and funded in part by The Law Foundation of Ontario. 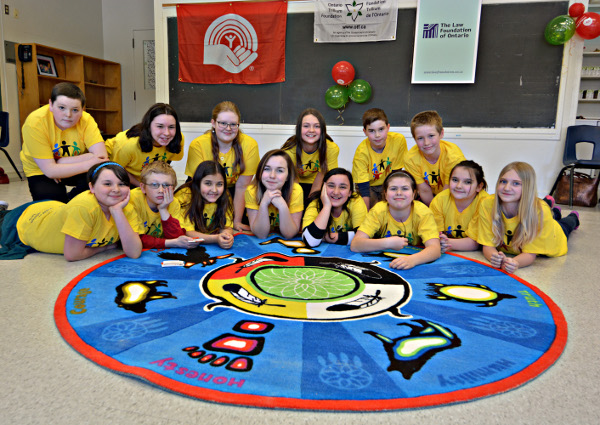 Lanark County youth will benefit from the value of restorative justice with a new three-year outreach initiative, courtesy of the Lanark County Community Justice Program (LCCJP).

The Promising Young People program, which will bring the restorative approach into schools and youth centres, was officially launched during a special ceremony at St. Francis de Sales Catholic School in Smiths Falls Feb. 26. Local dignitaries, including Smiths Falls Mayor Shawn Pankow, Lanark County warden Gail Code and Lanark-Frontenac-Lennox and Addington MPP Randy Hillier, as well as policing, mental health and school board partners, gathered to hear about the initiative, made possible through a $318,000 Grow grant from the Ontario Trillium Foundation. Other partners offering financial support include United Way Lanark County, who threw in $20,000 over the next two years through a United Way Collective Impact Grant, and $15,000 from The Law Foundation of Ontario.

“We received some very generous funding from these organizations that is allowing us to take our programming into all of the schools,” LCCJP executive director Beth Peterkin noted. “So starting next school year, we will have volunteers coming into the schools to work with your teachers, your staff, your bus drivers, your custodians, your student councils and the students themselves to teach you and help you learn restorative language.”

Fittingly, the event was the first gathering to be held in the school’s new peace room, featuring an Aboriginal theme, complete with vibrant murals. Guests received warm welcomes into the school by groups of students wearing bright yellow T-shirts, created for the program launch.

“This new room is for circles and class meetings,” noted grade 8 student Alaiya Blue. “We are proud that you have chosen to launch your new program from our school.”

The concept for the room was put into gear thanks to principal Theresa Lalonde-Pankow. She had hoped to have the room ready for student use by May, but when Smiths Falls Police Const. David Murphy volunteered St. Francis as a possible venue for the Promising Young People launch, that timeline sped up.

“This board (Catholic District School Board of Eastern Ontario) has been active in restorative justice for a number of years and when I came here, we had the opportunity to have an empty classroom,” she explained. “I just thought it would be great to have a place that’s free of distraction for kids to come and to have a chance to talk out problems, to have class meetings.”

Lalonde-Pankow said it’s important to teach students at a young age to go to people they’re having difficulties with to solve problems. “We’re hoping we’ll be able to do that from this room,” she commented.

During the launch, LCCJP executive director Beth Peterkin encouraged guests to use a special stone “talking piece” when it was their turn to speak, “because a restorative approach is all about being respectful and listening to whatever anyone else in the room is saying.”

For the past 15 years, LCCJP has been a staple in the community, working with police and Crown attorney partners to divert cases out of the criminal court system. Peterkin said whether it’s a vandalism or bullying case, “somebody has done something wrong, something to harm somebody else and we work with the person that did the harm and we work with the person that was harmed and we bring them together to have a very respectful conversation about what happened…”

Commenting there are “always two sides to every story,” Peterkin said going to court and sitting in front of a judge doesn’t necessarily provide the opportunity to tell that story.

“You sit there (in court) and you don’t get to explain your side of the story,” she explained. “We want to continue helping to heal those kinds of harms in the community.”

That same approach that has had so much success for LCCJP will now be applied in schools and on playgrounds, encouraging students to work out their conflicts and respect one another.

Hillier called the restorative justice program a “beneficial one” and applauded the LCCJP’s work. “The LCCJP has been a tremendous benefit to our county and Smiths Falls,” he stated. “As a provincial parliamentarian, the job of a parliamentarian is to create laws, however, what is often lost at Queen’s Park and lost in the creation of laws, is also the application of laws. The restorative justice program is a much needed and much beneficial program in helping us all to understand and find better ways to apply the law and find better remedies.”

Following the presentation of an Ontario Trillium Foundation plaque, LCCJP board member Scott Ferguson read a statement provided by The Law Foundation of Ontario, who were unable to have a representative in attendance.

“The Law Foundation of Ontario is proud to be a contributing funder to this exciting project. Projects such as this align with our foundation’s vision statement: Putting people at the front of justice,” the statement read. “In addition to acting as a diversion method away from the courts and facilitating greater access to justice, restorative justice practices can be an effective way to avoid conflict, build self-esteem and communication skills in our youth and improve the overall health of the community.

United Way Lanark County’s board president Helen McIntosh said the organization has been partnering with LCCJP since 2007 and believes in the work they do. “…We’re pleased to see the way the Lanark County Community Justice Program’s community programs work with our partners to bring important community projects as it is an excellent example of United Way Lanark County’s desire to encourage organizations to work together for a greater impact,” she remarked. “This project holds great potential and we look forward to seeing the outcomes and seeing the many ways in which we know the county will benefit.

McIntosh pointed out that not only does LCCJP help repair harm from conflict and crime, but it also instills a long-term “quality of life in our community.”

While it’s easy to blame youth who make bad judgments or follow the wrong path, Code said it’s not always their fault.

“…I kind of get upset when I hear about this because children are not born bad. They come to us perfect, with little innocent hearts and the purest of spirits,” she said. “I defend them by saying, don’t blame it on the children…”

“I feel our society and environment and the social pressures kids are facing daily, some don’t receive the love, support and guidance we all need in our early years,” Code continued. “And this program gives young people hope and encouragement in providing the mentoring, the need to make a brighter future and that’s down to the volunteers.”

A St. Francis alumnus himself, Pankow said sometimes youth don’t make the best decisions and end up in the court system, but LCCJP can stop that before it happens.

“Sometimes admitting you’ve made a mistake, especially the person that you’ve hurt, is probably the hardest part of dealing with that and I think this program and the funders who have allowed this program to happen, having probably helped turn some lives around, maybe before they entire the criminal justice system,” he explained. “…Sometimes things don’t always work the right way, so this is very encouraging to know this is going to be guiding children at a pretty young age.”

Prior to cutting the ribbon to officially launch the Promising Young People program, LCCJP board member Murray Long thanked Peterkin for her tireless efforts in securing funding.

“In a way of saying thank you, there is one person I really do need to thank publicly very much and that’s Beth Peterkin,” he said, noting she wrote the grant applications to the three organizations that brought the program to fruition. “…Beth deserves a huge amount of recognition.”

About The Law Foundation of Ontario

Established by statute in 1974, The Law Foundation of Ontario is the sole foundation in Ontario with the mandate of improving access to justice. Through granting and collaboration, the Foundation invests in knowledge and services that help people understand the law and use it to improve their lives.