Skip to main navigationSkip to main contentSkip to footer
We're hiring! See the job postings.
/ It’s the commute that’ll get you

It’s the commute that’ll get you

Brian O’Neill studied law in Halifax and Victoria, but was drawn to one of Canada’s lesser-known coasts for his articles – to the Moosonee and Moose Factory offices of Keewaytinok Native Legal Services. 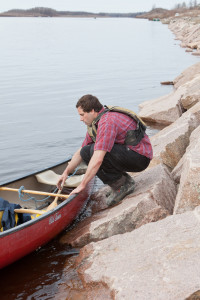 Brian O’Neill studied law in Halifax and Victoria, but was drawn to one of Canada’s lesser-known coasts for his articles – to the Moosonee and Moose Factory offices of Keewaytinok Native Legal Services, a short distance from the shores of James Bay.

A Sudbury native, Brian had led youth canoe trips in the far north and briefly worked as a supply teacher in Moosonee before law school. He was drawn back by both the community and the nature of the legal work, saying he wanted a broad and hands-on articling experience.

About half his work involved direct client services – often provided on a walk-in basis and sometimes requiring the help of a Cree translator – in areas such as criminal law, housing related matters, and EI and social assistance eligibility.

He also provided research support to the two-member local private bar, helped Keewaytinok to expand its public legal education initiatives, and contributed to the clinic’s engagement with band councils on governance issues relating to their service delivery responsibilities.

Brian ended his articles wanting to practice in a clinic, and will take with him a strong sensitization to the access to justice challenge in areas like the James Bay region.

He says simple geography is one of the biggest factors, noting that the closest small claims court is a $100 and five-hour-plus train ride away in Cochrane, with the added barrier of at least $100 for a hotel room.  Greater video-based or other remote service offerings on the part of boards and tribunals, he suggests, might be part of a solution.

He also ended his articles with lasting impressions of very distinct professional and personal experiences – such as commuting options that included canoe, snowmobile, cross-country skis and even helicopter when river conditions required.

“It’s a hard experience to describe,” Brian says.  “You’d really have to be here looking out our window at the frozen river and the little ski-doo taxis going across it to fully get what it’s been like.”