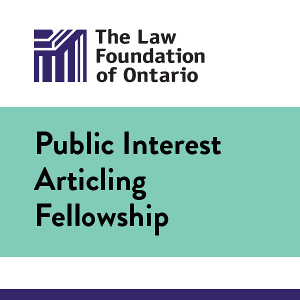 The Law Foundation of Ontario created the Public Interest Articling Fellowship Program to help respond to the public’s need for legal assistance and to help give law students valuable experience in public interest law. The Foundation makes a substantial contribution to public interest law in Ontario through this program as many organizations simply do not have enough funding to host articling students.

Aditya Rao is the 2018-2019 articling student at Amnesty International Canada, having completed a joint JD/MA from the University of Ottawa’s Faculty of Law and Carleton’s Norman Paterson School of International Affairs. Aditya has been active in refugee resettlement and migrant justice work for over a decade and is currently an organizer with the Ottawa Sanctuary City Network. He also serves on the Board of Directors for the World University Service of Canada and is a member of the Canadian Association of Refugee Lawyers (CARL).

In 2016 and 2018, Aditya was an organizer of CARL LobbyCon – two student-led conferences that brought law students from various Canadian law schools to Ottawa to learn advocacy skills and meet with MPs to push progressive changes to refugee policy. Planning for CARL LobbyCon 2020 is soon to be underway with exciting opportunities for growth and innovation.

Aditya is a community organizer, a former political staffer and a compulsive volunteer on election campaigns. He tweets at @aditrao.

Ghannia Bokhari graduated from the University of Ottawa Faculty of Law in 2018. Prior to law school, Ghannia attended the University of Toronto where she received a double major in Political Science and Socio-legal Studies. From a young age, Ghannia wanted to pursue a career in social justice. Her experiences working in the public interest sector gave her special insight into the particular barriers faced by low-income and vulnerable communities, such as refugees, unrepresented litigants, and women who have survived domestic and sexual violence. One of these experiences was her internship at the Canadian Centre for Victims of Torture, where she helped refugees resettle in Canada by facilitating their access to housing, healthcare, schooling, and the legal system.

In law school, Ghannia pursued her commitment to working with vulnerable communities. She contributed to the Refugee Sponsorship Support Program, where she assisted lawyers in sponsorship applications for Syrian and Iraqi refugees. She also worked as a student caseworker in the Women’s Division at the University of Ottawa Community Legal Clinic. In this role, she assisted women who had survived domestic and sexual assault in getting monetary compensation. Ghannia learned first-hand how domestic violence pushes women into precarious legal, economic, and social conditions and how they are further traumatized by the legal system, especially the criminal justice system.

Ghannia is thrilled to be articling with the Barbra Schlifer Commemorative Clinic where she can continue to fight for the protection and advancement of survivors of gender-based and sexualized violence. Ghannia is confident that the PIAF program will help her develop the skills required to be a fearless legal advocate for vulnerable communities.

Teddy Weinstein is a graduate from the University of Windsor, Faculty of Law. He also holds a BA in History from McGill University. At Windsor, Teddy represented his school in several advocacy competitions, including the BLG-Cavaluzzo Labour Moot in London Ontario, where he earned best team and top oralist. Teddy was a highly active figure on campus, leading two student clubs: OUTLaws, an LGBTQ+ lawyer advocacy and social group; and Snakes and Lancers, Windsor Law’s board gaming club. Teddy also served the student body on Faculty Council during his third year.

Teddy has wanted to work in the public interest since before starting law school, inspired by his family’s long history of philanthropy and political advocacy. He is honoured to receive the Public Interest Articling Fellowship and is looking forward to his experience at the Canadian Civil Liberties Association.

Marilynn Rubayika graduated from the University of Ottawa with both a Juris Doctor and a Licence in Civil Law. During law school, she found her passion for international justice and realized that pursuing a career in the field would be a way for her to promote and defend human rights, especially those of women, children and other vulnerable communities.

After completing two legal internships at the International Humanitarian Law department of the Canadian Red Cross and the Crimes against Humanity and War Crimes Section of the Department of Justice, she joined Lawyers without Borders Canada. In this last position, she volunteered as a legal advisor in Ivory Coast for the most part of the year where she worked with vulnerable individuals such as war victims and persons at risk of statelessness. Marilynn’s proudest achievement to date is that she has found her purpose, to use her skills and knowledge to serve those in need.

Chris Nagel completed law school at the University of Ottawa. He has an Honours Bachelor of Arts degree from Carleton University, where he majored in Criminology and Criminal Justice, with a concentration in Law. During his time in law school, Chris worked as a case worker for the University’s Conviction Review Project, which sparked his drive for exonerating those who have been wrongfully convicted of crimes and preventing future injustices. Chris also gained leadership experience serving as President of the Criminal Law Students’ Association.

Throughout his academic studies, Chris worked at several law firms, gaining experience in criminal, civil and family law matters. He has a passion for criminal law, including a particular interest in Charter issues and criminal matters involving youth. In his spare time, Chris enjoys playing sports and coaching youth recreational basketball. Chris is excited to be a part of the Innocence Canada team, and looks forward to working with such a highly reputable organization.

Leah Horzempa is a recent graduate of Osgoode Hall Law School. In her first year, she volunteered at Osgoode’s Community Legal Aid Services Program. In the summer and fall of second year, Leah was a legal caseworker at Parkdale Community Legal Services in the Housing Department, where she regularly litigated and negotiated on behalf of low income tenants at the Landlord and Tenant Board. In third year, Leah was a student of Feminist Advocacy while she volunteered at the Barbara Schlifer Commemorative Clinic, which specializes in the legal issues associated with violence against women.

As a Métis woman, Leah is thrilled to be articling with Peacebuilders, an organization that provides restorative justice processes for young offenders in Toronto. Leah has aspirations of one day using the legal advocacy and restorative justice skills learned in articling to give back to the Georgian Bay Métis community where she comes from. Beyond being a passionate advocate for change associated with poverty as well as women’s issues, Indigenous and mental health issues, Leah is a vocalist in a performance jazz trio.

Chandler Buchanan earned her Juris Doctor degree at the University of Ottawa’s Faculty of Law where she specialized in Technology Law. Prior to law school, Chandler completed her Honours Bachelor of Arts degree in Media, Information, and Technoculture at Western University’s Faculty of Information and Media Studies.

Chandler went to law school at the University of Ottawa to further her specialization in technology law and policy. In her first year Chandler was selected as a candidate for a “Technoship” where she worked as a research assistant for Professor Michael Geist. In this position, she worked on a wide range of issues including research related to the Trans Pacific Partnership and cultural policy issues.

Chandler continued to work in public interest positions throughout law school. She interned for the Information Communications Technology Council, an organization that creates evidence-based policy advice, and creative capacity building programs for the digital economy.

Chandler also interned for the Privacy Commissioner of Canada assisting with many projects which ultimately helped protect and inform the public about their privacy rights. Chandler also interned for Canadian Blood Services and later for the Canadian Internet Policy and Public Interest Clinic, where she assisted in researching for the clinic’s intervention in R. v Jarvis, a seminal Supreme Court of Canada case involving children’s and women’s privacy rights. All of these experiences have shared the same focus of advocating for the public interest and helping improve the lives of those around her. Chandler is excited for the opportunity to continue working in this area at PIAC.