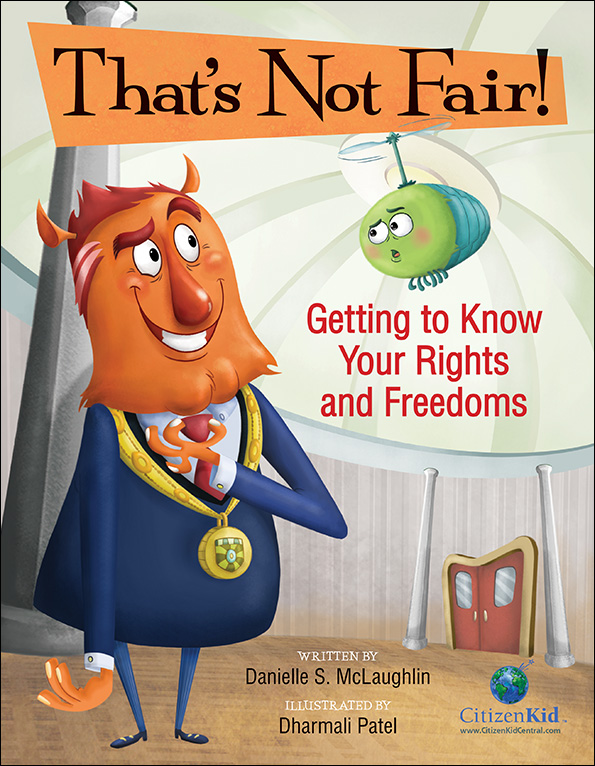 As soon as children can say “that’s not fair!”, they’re ready to think critically about what it means to live in a democracy. That’s the purpose of a new children’s book called That’s Not Fair!, Getting to Know Your Rights and Freedoms.

The book was written by Danielle S. McLaughlin, the former Director of Education at the Canadian Civil Liberties Association and Education Trust (CCLA/CCLET).

The book is made up of six short stories starring Mayor Moe and the City Council of a “sometimes wacky” city. In each story, the group is presented with a problem and they make a decision to address the problem with a new law, only to discover later there were unintended consequences. The child-friendly topics include things such as, ‘Should you be allowed to search someone’s bag because you think they have something of yours?’ and ‘Does it make sense to have a law that states people can say only nice things?’ After each story there’s a series of questions to consider and discuss. This encourages young readers to look at all sides of an issue and it engages their critical thinking skills and fosters empathy for other people’s points of view.

Mayor Moe and the gang first came to life as a video series written and produced by CCLET with initial funding by The Law Foundation of Ontario. The idea for the videos and the book were conceived when Ms. McLaughlin spent a term at the University of Windsor’s Faculty of Education as part of The Law Foundation of Ontario’s paid Community Leadership in Justice Fellowship.

“The Fellowship gave me an opportunity to have some respite from my day-to-day work so I could focus on the more creative aspects of civil liberties education,” Ms. McLaughlin shared. “As a result, CCLET was able to use my research and writing to develop significant resources for teaching civil liberties for elementary teachers. In fact, I was able to lay the groundwork for the development of CCLET’s website www.thatsnotfair.ca as well as for the book.”

That’s Not Fair!, Getting to Know Your Rights and Freedoms is published by Kids Can Press and is available to buy now. Watch a very short video about the book.

Applications for the next Community Leadership in Justice Fellowship are being accepted until April 29.