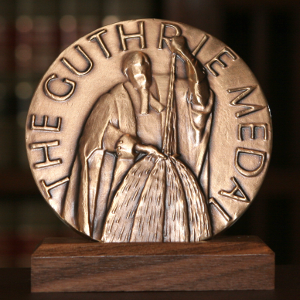 The Law Foundation of Ontario is pleased to announce that the 2020 Guthrie Award recipient is the Elders' Council.

The Law Foundation of Ontario is pleased to announce that the Elders’ Council is the 2020 recipient of the Guthrie Award, the Foundation’s signature award to recognize exceptional access to justice champions.

The Elders’ Council was established using Indigenous methodologies to support the work of the Indigenous Justice Division (IJD) of the Ministry of the Attorney General. The Council holds positions for up to 13 Indigenous Elders who are Knowledge Keepers from across Ontario. The Elders were approached to participate based on their personal leadership strengths and specialized knowledge. The Council is gender-balanced and reflective of the diverse Indigenous Nations and regions of the province.

The Elders’ Council is committed to supporting the reclamation of Indigenous legal systems and strengthening justice for Indigenous people in the province. The Council works to guide the IJD and its staff in an effort to repair the relationship between the Ministry of the Attorney General and Indigenous communities within Ontario.

“The Elders bring a compelling truth and integrity to their work,” says Linda Rothstein, the Foundation’s Board Chair. “By sharing their knowledge and lived experiences directly with those within the justice sector, the Elders’ Council is helping to transform not just opinions but policies and laws that could bring about meaningful change and improve access to justice for Indigenous people across the province.”

Quite unprecedented in other jurisdictions, the Elders’ Council has provided formal advice directly to three Attorneys General for Ontario, as well as to staff at all levels of government across various Ministries and Divisions.

The Elders’ Council also helped develop and co-facilitate Bimickaway, which is an award-winning, 17.5-hour Indigenous cultural competency training for justice sector workers. Bimickaway is an Anishinaabemowin word meaning ‘to leave footprints’. Participants consistently provide feedback that the Elders’ contributions are the most valuable and transformative part of the curriculum and help them understand the real-life and ongoing impact of the government laws and policies that are discussed in the training. Since 2016, over 5,900 people have completed the training and it has a long waiting list.

The Elders’ Council has also educated the sector, and the public, through:

“The Elders change the hearts and minds of government employees by creating respectful forums for dialogue,” says Kimberly Murray, Assistant Deputy Attorney General, Indigenous Justice Division, who nominated the Elders’ Council for the Guthrie Award. “In all of its work, the Elders’ Council has had a deep and transformative impact on everyone with whom they have interacted.”

Members of the Elders’ Council represent First Nation, Inuit, and Métis communities from across Ontario. All of the Elders have worked in service of their communities throughout their lives, including in justice, health, education, and in leadership positions. Each brings a unique perspective based on their personal experiences, professional accomplishments, and Indigenous knowledge. The following Elders will be receiving the Guthrie Award:

In my role as Deputy Attorney General, I found the advice and knowledge that the Elders shared invaluable. The exceptional contributions of the Elders’ Council to MAG have been central for MAG to make the justice system more culturally relevant and responsive to Indigenous Peoples. When dealing with issues such as over-representation of Indigenous Peoples in our jails or the impact of the lack of bail beds for those from fly-in communities, what was most helpful for me was to meet and listen to the Elders and take their advice and apply it to solutions we might not have developed yet… The Bimickaway training of almost all Crown Attorneys has also led to a different approach by many of them across the province.”

As an Anishnawbe from Wikwemikong First Nation, the importance of Elders in guiding our work is vitally important. We have always been taught to include and consult with Elders in our work as their guidance, sharing of knowledge and experience is critical. … The Elders’ Council increases access to justice for Indigenous communities and people. The Council does this by sharing their knowledge and personal experience with participants in Bimickaway, by providing spiritual and emotional support to families of missing and murdered Indigenous women and girls, providing support to families during coroner’s inquests, and providing guidance and advice on law and policy at the highest level within the Ministry of the Attorney General.”

“In my role as the Ontario Independent Advisor on Corrections Reform I had the opportunity to meet with and receive the benefit of advice from the Elders’ Council several times. The members of the Elders’ Council have first-hand experiences of the negative effects of colonialism and assimilative government laws and policies. … During our frank and passionate discussions, I gained a deeper understanding of how the existing criminal justice structures and processes target Indigenous Peoples and their communities. Their message to me had direct impact on my work and recommendations.”